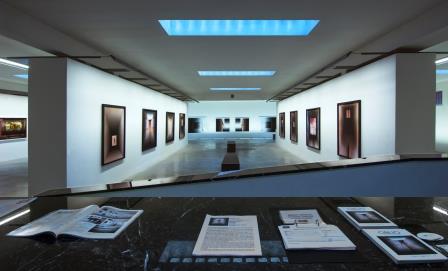 For Susana Serpas Soriano, photographer/artist born in El Salvador in 1976, it all began with drawing.
Through her studies of art and training as a studio and film set still photographer, she perfected her experimental techniques and developed
a specific, highly personal artistic language.
Serpas Soriano has never considered doing anything other than communicating with the world through her art.
Photography, collage, and sculpture are her tools for synthesizing her expression of an imaginary of forms, figures, and places shrouded in
a halo of perspective obscurity.
An intimate obscurity, interpreted through geometry understood as space expressing an interior milieu.
Serpas Soriano’s work proposes a photographic archetype that challenges the act of mental imaging to reveal all of its implications for the
emotional, physical, and synaptic spheres.
Her path sets out from a far away. But in saying this, we must remember that distances do not lie exclusively in the realm of geographical
estrangement, but also in the spiritual terminals of the artist’s intimate life experiences.
Culture shock is the jet lag of aesthetics, the fracture between our past experiences and our perceptions in the here-and-now.
It was almost inevitable that Serpas Soriano should find her modus operandi in the Pandora’s box of the photographic medium; a medium
that is in and of itself object yet at the same time leaves open the entire dimension of emotional content.
No other art form could have offered her the same spectrum, the same simultaneity of the objective and the subjective, with which to lend
expression to the emotional and spiritual states of her art.
Her work experiences at the studio of the great contemporary art photographer Claudio Abate were of fundamental importance in developing
her instinct for framing and her studies of light and shadow, giving her the skills and the maturity to fully explore the relationship between
image and persona, between object, representation, and mental vision.
After having participated in various group exhibitions, in 2009 Susana Serpas Soriano held a one-woman show of her photographic and threedimensional
works in a site-specific project at Rome’s MLAC Museo Laboratorio di Arte Contemporanea, entitled Wunderkammer: l’ombra
del tuono [Wunderkammer: The Shadow of Thunder].
In 2012, at Galleria MC2 in Milan, she presented Natura Anfibia [Amphibious Nature], the series of collages Vedute Multiple [Multiple Views]
that frame the space of the composition in a geometry built up of stratifications of paper over paper and finally, acrylic finishes.
The following year, at the Fondazione Volume of Rome, she inaugurated her personal exhibition Conflitto Unico [Single Conflict], addressing
the theme of identity as an intimate and conflicted discussion of our single human nature.